For thousands of years people have wondered, “Are there planets like Earth?” “Are such planets common?” “Do any have signs of life?” Today astronomers are poised to answer these ancient questions, having recently found thousands of planets that orbit nearby stars, called “exoplanets”. Professor Sara Seager, one of the world’s leading experts on this search for Earth-like planets, will share the latest advances in this revolutionary field.

Professor Sara Seager of the Massachusetts Institute of Technology is a planetary scientist and astrophysicist, who grew up in Toronto. She has been a pioneer in the vast and unknown world of exoplanets, planets that orbit stars other than the sun. Now, dubbed an "astronomical Indiana Jones", she on a quest after the field's holy grail, the discovery of a true Earth twin. Professor Seager is the Deputy Science Director for the MIT-led NASA Explorer-class mission TESS, anticipated to find thousands of exoplanets. Professor Seager is a member of the US National Academy of Sciences, a 2013 MacArthur Fellow and was named in Time Magazine's 25 Most Influential in Space in 2012. Asteroid 9729 Seager is named in her honor. 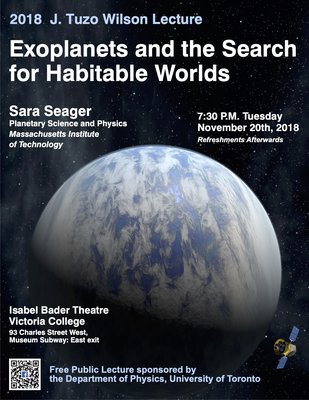